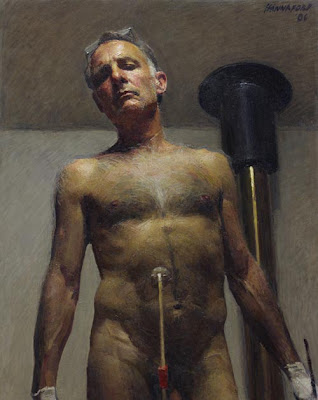 I met the Australian great portraitist Robert Hannaford (Alfie) in 2005 at a party in Adelaide. He stayed only with me and my husband the whole night and we talked about art, portraits and philosophy. He is a very charismatic man, very charming and passionate. We were completely seduced from the first moment, we will never forget the night when I chatted with Robert Hannaford. One year later he was severely ill with cancer, but his passion of life must have saved him. I didn't expect after all the ordeal he has been through to come to the opening of my exhibition in North Adelaide. But he did, he showed up there in the gallery with his clothes covered with paint, and amazed everyone. Thank you Alfie.
http://australianetwork.com/nexus/stories/s2097088.htm
Robert Hannaford never thought he’d be an artist. Despite that, he’s become one of the country’s best known realists and he is a self-taught artist.
Robert Hannaford: I've won the People's Choice three times. Well, I value the People's Choice because of its democratic nature, if you know what I mean. I always get a bit of a pleasant surprise if I win it because I think, "Of all the people that went there to the gallery, most of them liked my picture best." Well, I suppose the main thing about him is that he has a... I think they call it a PEG - it's a tube - inserted into the stomach to feed. And that's me. I had it in for about five months, I think, due to my throat cancer. Actually, it was cancer on the back of the tongue. And the most likely cause, as I'm not a smoker and never have been, is that it was from oil paints. Cadmium and lead - both poisons and a bit carcinogenic. Paul Keating pointed out to me that I had a bad habit of putting my brushes in my mouth sometimes and I thought, "Oh, yeah, thanks, Paul. Good advice, but I think I'm OK."
Lowitja O'Donoghue: Putting that dreaded brush in his mouth, which he did a few times. And I had warned him that I was actually going to stop him from doing that. It was the first time that I'd ever sat for a portrait. I was quite shocked when I saw the final. Deep down in the person that is Lowitja O'Donaghue is a lot of hurt, a lot of pain and experience I think that he's managed to convey in that portrait. I knew from the first day that I came to this place and sat in this chair that this was a man that I felt that I could accept as my brother.
Robert Hannaford: Just to look at a human face seems to suggest so much. It seems to be the whole history of mankind. One can't but be sort of inspired by that. I contemplated going to art school and decided definitely against it because the art schools in those days, perhaps even as now, weren't teaching the sort of thing that I wanted to learn. And I knew very definitely what I wanted to do and that was to draw and paint the life around me as I'd done all my life anyway. These are drawings of an old man called Hans Krevel who I met when I was living in Melbourne in the late '60s, early '70s, honing my skills, I suppose you could say. I studied him from every angle. I tried to capture his various moods. If I wasn't satisfied with what I'd done, I'd draw it immediately and compare the two. One of the things in painting portraits is to get the hands looking natural. The hands are as interesting and as expressive as the head. I grew up in this vicinity, the mid-north of South Australia. It's a very special area for me because I love the country, I love the landscape. I've always been interested in death and decay and change, but I guess having had the cancer just makes me even more interested. It was an obsession. I found him in a fence just north of Hawker. He was hanging by his paws and he'd got his back leg caught in the fence and he obviously died there. So it's got that quality of decay, natural decay. It's just the angles of it, the bones, the muscles all showing through. Very inspirational. I had to have it. These two are of my father when he died about 15 years ago. These here are of my wife who died of cancer about nine years ago. These were drawn in the last couple of days before she died when she was in a coma. And it was a very poignant experience for me. I've always seen drawing and painting as a way of understanding the world. Whenever I see something that interests me, if I draw it and spend time looking and drawing, I learn about things that I'd never have discovered any other way. I've come here as a child and I love this particular spot because of the long views right out. I feel I'm on top of the world here surrounded by the trees that I love and the birds.
http://australianetwork.com/nexus/stories/s2097088.htm
Posted by Magda Vacariu at 9:40 AM

Dear Magda vacariu, Hannaford looks like a fine painter, one I did not know about. Interesting blog, enjoyed looking at the variety of images and reading some texts.

If you feel like it, have a look at my website: www,robin-darcy-shillcock.com. It shows what I do.