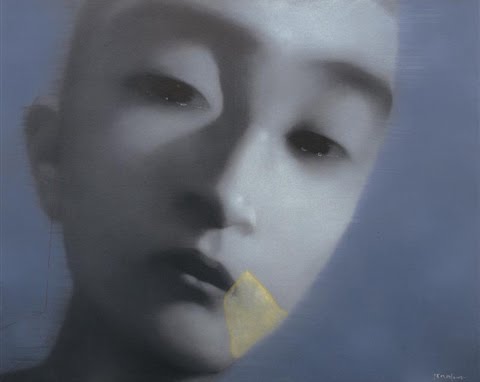 What is about these large figures of Zhang Xiaogang, why do they make me feel like a horrible past, which is not even mine, is coming back to haunt me? They look back at me from up there, from their time in the future, without a sound, their empty stare torments me. I understand why a buyer of a painting, had to bring it back to the gallery, their silent reproaches cannot be borne by everyone. 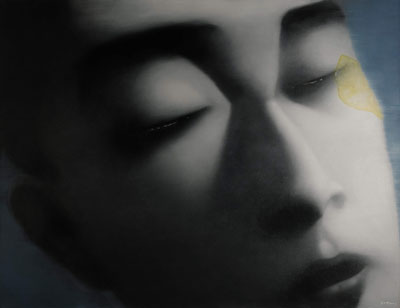 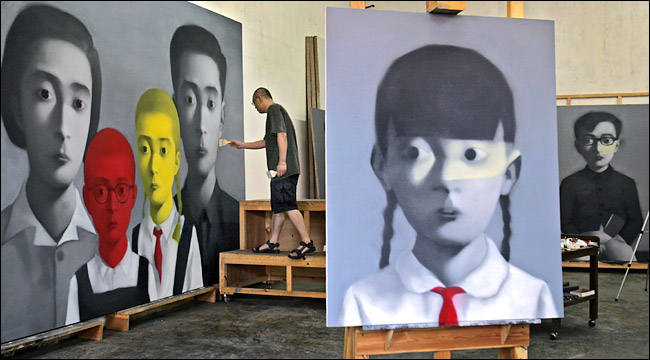 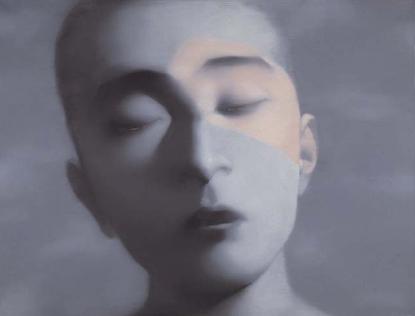 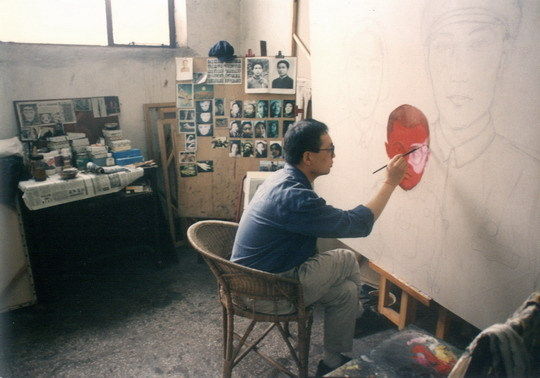 Zhang Xiaogang is one of the most famous artists of China but he doesn't seem to care about fame or fortune. His portraits are based on studio family photographs popular during the Cultural Revolution years in the 1960s and 1970s.
“There’s a complex relationship between the state and the people that I could express by using the Cultural Revolution. China is like a family, a big family. Everyone has to rely on each other and to confront each other. This was the issue I wanted to give attention to and, gradually, I became less and less linked to the Cultural Revolution and more to people’s states of mind.”
For years these paintings weren't permitted to be displayed publicly in China. In 1996, Zhang was invited to show at the Shanghai Biennale, but his work was pulled on the orders of a senior Communist Party official, anxious about what he saw as reminiscences of the Cultural Revolution. Now, Zhang can barely keep pace with demand, being quite a slow painter who works alone. Most of his buyers are international collectors. “Many people in China want to buy my paintings now,” he says, “but for them art is like stocks and shares, and they just want to ‘stir-fry’ the prices. So I am careful who I sell to.”
Art critic Huang Zhuan said about Xiaogang's work: “In a big family, he had to learn how to shut himself up in a secret small cell. His paintings give room for viewers to fill in their own experience. He just made the story his mode. Based on understanding, the viewer can find his own story.”
The Saatchi Gallery: "Inspired by family photos from the Cultural Revolution period, as well as the European tradition of surrealism, Zhang Xiaogang’s paintings engage with the notion of identity within the Chinese culture of collectivism. Basing his work around the concept of ‘family’ –immediate, extended, and societal – Zhang’s portraits depict an endless genealogy of imagined forebears and progenitors, each unnervingly similar and distinguished by minute difference. Often painted in black and white, Zhang’s portraits translate the language of photography into paint. Drawing from the generic quality of formal photo studio poses and greyscale palette, Zhang’s figures are nameless and timeless: a series of individual histories represented within the strict confines of formula. The occasional splotches of colour which interrupt his images create aberrant demarcations, reminiscent of birth marks, aged film, social stigma, or a lingering sense of the sitter’s self assertion. Incorporating the aesthetic of traditional Chinese charcoal drawing, Zhang’s style wavers between the exaggeration of animation and stoic flatness. Muted and compliant, Zhang’s extended family convey individual identity through their unalterable physical features: too big heads, tiny hands, long noses, and subtle alterations in hairstyle give clues to intimate characteristics and stifled emotions. These dream-like distortions give a complex psychological dimension to Zhang’s work, heightening the tension of regulated claustrophobia, and initiating suggestive narrative readings." The Saatchi Gallery 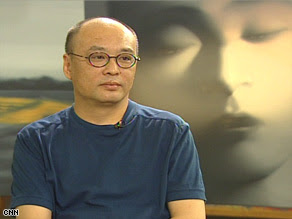 Posted by Magda Vacariu at 1:36 PM No comments: